termites flying, originally uploaded by AmyEmilia.
The rainy season at Kivuvu was eagerly anticipated, and the annual flight of termites confirmed that the rains had truly come. These termites lived in great colonies underground and in mounds. When a good soaking rain came, the insects would begin to come up out of the ground and begin their mating flight. Our proximity to the cattle ranch probably helped, because there were a great many established termite mounds in the fields behind the house.  Sometimes the flights were just a few insects, sometimes thousands. Although we did try to fool the termites by saturating the ground with the hose, they didn’t fall for the trick very often. 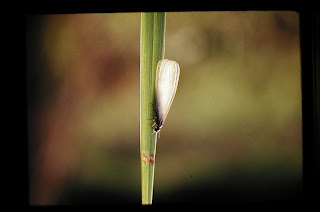 When wispy columns wavered in the afternoon light, we would spring into action. Flying ants, as we called them, are very good eating! A large bag or net was placed over the exit hole, and as many as possible were captured.Next, we carefully disengaged them from the netting, and pulled the wings off the ones who had not already shed their wings when caught. Wings are not very tasty.

The more adventurous among us would eat them raw and alive (my brothers liked to do this) but the rest of us would take the catch to Pedro (our houseboy) to fry them. Hot, salty, crispy, they were deliciously savory!  Our diet was fairly low in protein and fat, which is probably why they tasted so good.  They might compare in flavor to the fattest, crispiest part of bacon.

I'm so glad that my dad took time to document this annual event.  It looks to me as though these were taken in about 1971 or 1972, since Sara is maybe 5 in the picture.  I don't remember her having braids very often so it's nice to see those!

Posted by AmyEmilia at 2:50 PM