Life is dangerous. Life is risky. It's worth it.

One of the very best essays I have read on the business of life.

I don't think of myself as particularly courageous or adventurous.  My late cousin Coralee has always been my definition of adventurous - she lived a life full of changes, challenges and stress, but also wonderfully full of love, joy and creative expression.  When I went to visit her in 2002, I was on the brink of making a big decision.  Spending three weeks with her in the deserts of Namibia was a formative experience and I came away from that trip with a better idea of who I am, and what I wanted from life.  When I left she gave me a small envelope which said - DO NOT OPEN UNTIL YOU GET HOME. Once home I opened it and inside there were 6 pair of beautiful little green tourmaline gems, and a single word.  "Remember".  And I do.

I went ahead with my decision to marry yet again. The ring on my finger has three of those gems, and an engraved reminder:  "Memento Audare Sempre"

Remember always to dare.
Posted by AmyEmilia at 9:16 AM 2 comments:

Wise quote from one of my favorite wise men.  There is a difference between being soft and being merciful.  Mercy comes from strength and knowledge and kindness.  Softness comes from weakness, perhaps even laziness.
Posted by AmyEmilia at 9:02 AM No comments:

On the road, from Houston to South Padre Island

As some of you may know, I took the bus from Houston to Brownsville on Friday, and my husband picked me up there and went back to the house on South Padre Island.  The first part of the trip was taking the Metro bus all the way downtown.  I caught the first one, at 5:59am.  Fortunately for me, there was only a light sprinkle of rain falling during the 2 block walk from our house to the bus stop.  An hour later at the corner of Louisiana and Webster, we had gone 20 miles and it was raining just a little bit harder. The 2 block walk to the Greyhound station went quickly!

My 8:15 bus to Brownsville (fare $25.50 one way) finally left at 8:38.  The passengers included an Army soldier going home for 4 days leave, a family with 5 small children, and two young men of unknown purpose.  Not very many of us!  I sat in the second row, on the right side of the bus, with a clear view of the road.

When we pulled out of the Houston station it began to rain HARD.  Four out of the six hours we drove, it rained.  Sometimes harder, sometimes softer... this tropical air from Hurricane Alex was persistent as we drove down US 59 and 77.  The bus driver began singing along to his Spanish music station, and I watched the road unroll across south Texas. 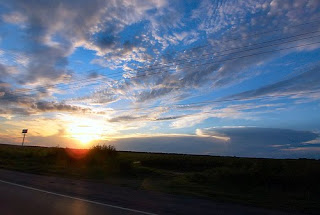 I have made this trip many times, although not by bus.  The flat land around Houston, filled with suburban houses and shopping plazas, gives way to cultivated fields and pecan trees growing in the river bottoms. Richmond, Rosenberg, Wharton (there is a Buck-ee's here that we often stop at), El Campo.      Hillje, Louise, Ganado, Edna, Inez, Victoria. Victoria is a stopping place, with a McDonald's and big gas station. Victoria is also the place where I got a speeding ticket a few years ago... so we always watch our speed carefully around here.

After Victoria, there is another landmark - a small field that has charming goats.  The road rises and falls over rolling hills, and there is one spot where I once saw a group of feral pigs.  We pick up US 77, and head further south.  The land becomes more and more rural, with large expanses of pasture and fewer cultivated fields.  The next town is Refugio (pronounced Re-furrio).  There is a McDonald's here, and also the HEB grocery store and gas pumps.

Just south of Refugio are the Urrea Oaks. The road divides around a small clump of ancient live oaks that are an historic Texas landmark. I've stopped there several times to stand under these trees and think about the history they have seen.  So glad that TXDot has preserved them.  The Historic Marker text: 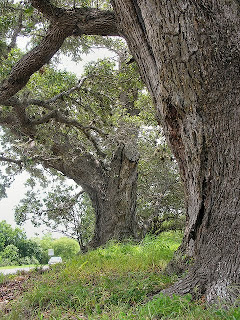 By tradition, camping place in March 1836, during Texas War for Independence, of Gen.Jose Urrea of Mexico. Strategically located, this was Urrea's staging area. Capt. Amon B. King came form Goliad with his Texas volunteers to support the Refugio townsmen, who were taken into the safety of Mission Nuestra Senora Del Refugio. Then Lt. Col. William also arrived on March 13, and the "Battle of Rufugio" began. Both King and Ward left protection on the Mission, and Urrea won final victories over them, capturing King's command on March 15 and Ward's on March 22. 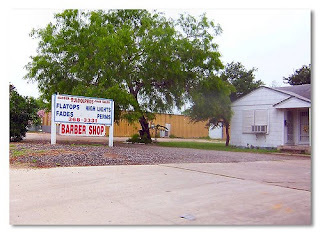 Woodsboro, Sinton (home of a famous rodeo), Odem (where trains often hold up traffic).  Odem used to have a great sign that always amused me. Sadly, the sign was taken down a couple years ago.

South of Odem, we pass the turnoff for Corpus Christi.  Then Robstown, where the bus is supposed to stop but didn't.   The fields around here are very very flat and usually planted with cotton or sorghum.  Far off to the left are many wind turbines catching the sea breezes.  To the right, there is a large oil refining plant that on night drives looks like a fantastic city of lights and fire and smoke.

Driscoll has a large fruit stand which sells fruit of questionable quality.  My one purchase there has discouraged me from ever stopping again.  Falfurrias is next, then Bishop, where we often stop at the Dairy Queen for chili burgers and a pit stop.  It's fun to listen to the families that come in from the surrounding ranches and small towns. 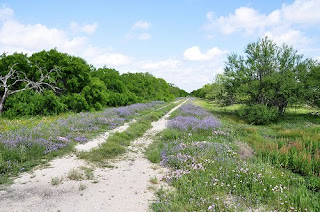 The next town is Kingsville, famous for the King Ranch.  One of these days I'm going to stop at the Kings Ranch museum.  Shortly after Kingsville is Rivera, which is the last stop for gas for 60 miles.  Almost everything between Rivera and Raymondville belongs (or used to belong) to the King Ranch.  I especially love this part of the trip.  The land is pretty wild, lots of brush and wildflowers.  There are lots of deer, some cattle.  Turkey buzzards soar overhead, there are thousands of butterflies and dragonflies, and the caracara hawk and redtail hawk are commonly seen. Sometimes there will be high fences that indicate the presence of exotic game. I've seen one zebra, various antelope, even oryx!  Certainly it would be easy to believe you were in Africa. 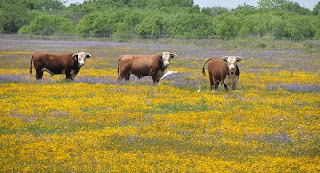 Smack in the middle of this empty space is Sarita, which is the Federal Border Patrol station.  Here, northbound traffic is stopped and each vehicle is checked. Usually we are just asked "US citizens?" and waved through.  The northbound busses are more carefully checked by a two-man team and sometimes a drug dog.
The land becomes much more sandy, with palmettos and yucca as well as grass and scrubby live oask.  Baffin Bay is near, although you cannot see or hear the water. After an hour or so, Raymondville comes into view. Actually, the first sign of Raymondville is a magnificant line of palm trees in the center between the divided lanes.
South of Raymondville are Lyford, Sebastian, Combes, and finally Harlingen.  Harlingen is largely a mystery to me - I've never stopped here except once to get gas.  San Benito (home of Freddy Fender) seems to me to merge into the Harlingen metro area.  The bus goes on to Brownsville, but when we travel by car we turn off to the east on Texas 100 for the final 30 miles to South Padre Island.  That 30 miles goes very slowly, with many small towns that earn money with speed traps.
On this occasion, the bus took me to downtown Brownsville, which is a charmingly un-renovated (for the most part) town that looks like it's most prosperous time was in the 20's.  Lots of brick buildings, sidewalks with store-windows displaying goods, and lots of shoppers.  The bridge to Mexico is right there, across the Rio Grande, and many people cross for shopping and visiting.  My husband met me at the bus station, and we drove back over Texas 48 towards Port Isabel. 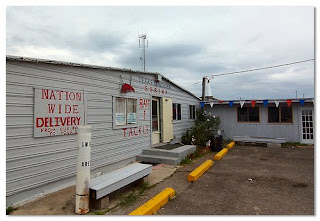 The Port of Brownsville is on the way.  The port has recently gotten busier building oil rigs.  But there is also a large shrimping fleet that calls the port home.  I have bought shrimp at Texas Longhorn Shrimp a few times.  They have their own boat, and I'm sure also buy from other shrimpers.   Good prices, fresh large shrimp, friendly service.  Worth a stop, if you are in the area. 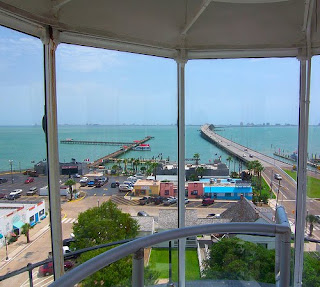 Texas 48 goes over the tidal flats and sand dunes of the coast, headed for Port Isabel.  There, we meet up with Texas 100, turning right towards the Island.  Landmarks here include the HEB and Wal-Mart, and the Port Isabel Lighthouse, which is a State Historic Landmark.
It looks great hung with lights at Christmastime, and is fun to climb too.  The view is fantastic on a good day.
As you can see in the photo, the Queen Isabella Causeway arches over the Laguna Madre and those tall buildings in the distance (2.37 miles away) are part of the small town of South Padre Island. The Causeway is the longest bridge in Texas!  On September 15, 2001, part of the bridge collapsed due to being hit by barges, and eight people were killed.  It took two months to  get the bridge reopened, and during that time traffic had to be ferried over.  This bridge remains the only connection to the island.  A second bridge has been under discussion for years, but who knows when that will be built.
Door to door, the drive is 359 miles long, and usually takes about 6 hours. The bus takes about the same amount of time, but costs less.  There are reasons for both methods.  I prefer driving for the flexibility it gives me to stop and investigate. On the other hand, the bus allows for sleeping!
All photos taken by me, at various times over the past few years.
Posted by AmyEmilia at 11:38 PM No comments: