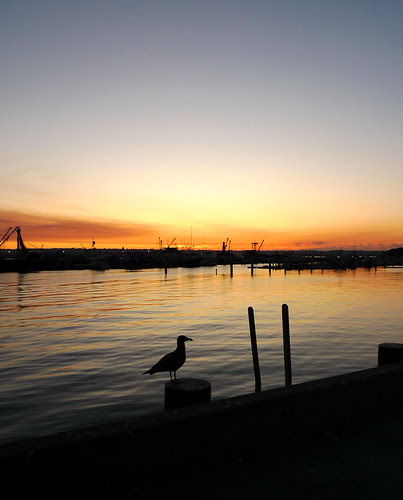 sunset in San Diego, originally uploaded by AmyEmilia.
I am privileged to be able to travel for my work. This week I spent just a couple days in San Diego. Took a walk along the waterfront last night, from the hotel on Broadway to the SeaPort Village. It was a warm, humid evening and pretty miserable actually. The shops were only mildly interesting. The best part of the walk was listening to a pair of musicians play near the Village. They were probably Mexican, playing guitars, pipes, flutes, the harp... it echoed out over the still water and the dark.
Posted by AmyEmilia at 10:50 PM No comments: 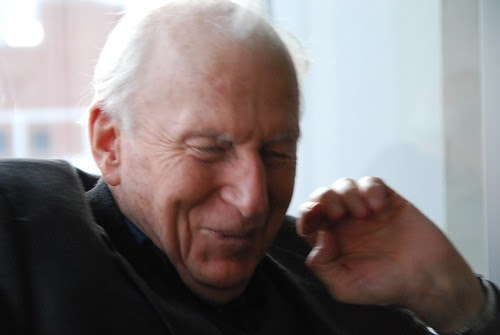 I love this photo of my dad. It embodies so many memories. I am thinking of him this evening, because in searching for something else, I ran across a list that we made together at the kitchen table, in September 2004. Somehow the conversation came around to the various jobs that his father, my Grandpap, had done during his life. Grandpap died when I was about 6, but I remember a tall man with huge hands, who seemed a bit grim. Photographs show broad shoulders, large features, strong-looking. He died young, in his early 70's I think, in about 1961. Here is list of the jobs that his father had, in the order that his son remembered them:

I also know that Grandpap was a devout Democrat - one time we found the precinct lists. He was away from home a lot, which left my Grandma to raise her five sons mostly on her own. The farm provided most of the food they needed, but cash was needed too. Grandpap's jobs brought in enough! Interesting how many of them are in the construction/engineering area. 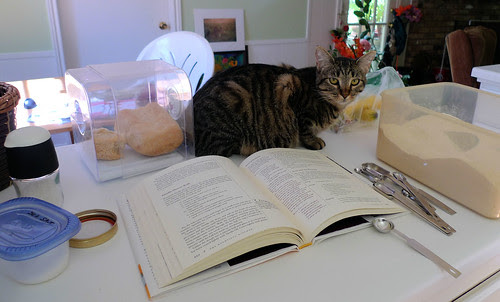 my assistant, originally uploaded by AmyEmilia.

Whenever I cook or bake Mo wants to be involved. She carefully smells everything but rarely actually tastes.

By the way - the Vanilla Dinner Rolls were really excellent! I highly recommend the cookbook, The Bountiful Kitchen by Barry Bluestein & Kevin Morrissey. This book is a staple in my kitchen and a source of inspiration.

Posted by AmyEmilia at 10:36 AM No comments: