I am a fan of Ebags products, and have purchased several of their items including the Ebags Professional 22". A great bag with a couple flaws - balance is compromised when it is fully loaded to the point of tipping over. Ebags had no problem with shipping me a new bag after my first Pro 22 was replaced under warranty because the zipper heads were completely torn off when checked from BWI to IAH in January.
To prevent the zipper heads from being torn off of my new bag (they are kinda big and heavy) I removed them all and instead put red ties (see pictures) which I got at REI. I was very hopeful that this replacement bag would last for many years to come. But it was not to be.
Once again traveling from BWI to IAH, I checked my bag. It was the second bag off the plane, and at first I didn't notice anything wrong - just a bit scuffed. But the handle was a bit hard to extend... and then I noticed a rip in the back... then a hole in the side... then I realized that my bag had been really damaged. 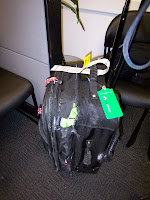 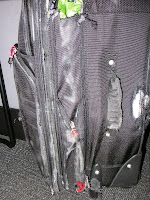 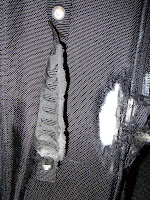 I nervously signed in at the Continental Baggage Services, and waited to see how this would be handled. It was late, I was tired, and in no mood to be disappointed. Thankfully there was no need for any assertive behavior. Within 20 minutes I was greeted by a cheerful woman whose response to my statement "this doesn't look like normal wear and tear to me" was a simple "I agree". She immediately offered to replace my bag, and brought out two different suitcases. I chose the second one, a Delsey Helium Lite 25" expandable. Reasonably comparable to mine, although larger and not quite as solidly built. And she let me keep my destroyed bag (which was good, since there was no way I could unzip it completely). Remarkably, there was absolutely no damage to the contents.
So now we have a new, larger suitcase and a very nice customer service experience too.
Posted by AmyEmilia at 8:05 PM

Wow. That WAS some major damage! Alitalia destroyed one of P's brand new bags we had just bought in Texas, and their response, "Sorry, you can have 10% off your next flight!"

Oh, the horror stories I could tell about losing my bags. Short version: The only way I got them back was to go to the airport and root through piles of hundreds of stranded bags. I am sure the rest of them have long since landed in some purgatory for stranded luggage. . .

Somewhere I remember reading about a site that sells lost luggage and its contents.