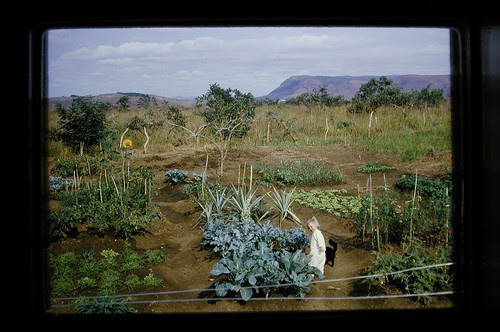 kivuvu garden 3, originally uploaded by AmyEmilia.
My dad is a talented gardener, and he really got to exercise those talents at Kivuvu. Our garden was the source of most daily vegetables. Grocery stores were non-existent, and although peddlers did bring vegetables to the back door it was on an irregular basis. Here is a shot of our garden, in about 1967, two years after we arrived. It looks to me as though Dad took it by standing on the washblock and putting the camera up over his head.  That's my sister Sara touring the garden with Jeremiah, the black cat. (He was named after the prophet Jeremiah in the Bible, because of his continual lamentations. A very talkative cat! Sometime I’ll have to tell you the story about the end of Jeremiah – it’s not a happy end.)

Our climate in Kivuvu was hot and wet during the rainy season, and dry and cool during shivu, the dry season. This photo was definitely taken during the rainy season, since I see the endive and collards (?) are bolting. The rainy season was slightly longer than the dry season, running from October through May. During that season we could expect daytime temperatures in the upper 90’s and nighttime temperatures in the 70’s. Skies were blue, with lots of puffy white clouds. Rain came in the form of huge thunderstorms. Since the station was on a hill, lightning strikes often accompanied these storms. (A particularly dramatic lightning storm will be written up soon!)

The dry season ran from June through September. Daytime temperatures were in the 70’s, and nighttime temperatures could drop as low as the high 50’s. During the dry season there was no rain whatsoever, although because of the continuous presence of grey, low hanging clouds you would expect rain. As the season advanced, the dust would get thicker and the well-water became muddier.

Gardening was quite different in the two seasons. The rain and heat of the rainy season meant that tomatoes and peppers and eggplant did very well. You can see lettuce and endive in the garden, but those would be hold-overs from the dry season garden, when cool weather crops did better. Late lettuce was always so bitter due to the heat. Pineapples also grew well. In a large field off to the right, we sometimes grew peanuts, sweet potatoes and field corn.

Off in the distance you can see the profile of the Bangu mountain. In between us and the Bangu was a cattle ranch full of half-wild cows with dangerous horns, and other wildlife. Most of the big animals were long gone from this part of Congo – the biggest might be a small antelope. Lots of snakes and mongooses, field rats and pythons, large and small birds of all kinds. The fields were burned off annually to control the regrowth of the forest and promote good grazing for the cattle.

Fortunately for the Meyers table, we had help with our garden. The main gardener was Garcia, an Angolan refugee who was a cool dude as well as a good worker. You can see that he took good care of the garden! Dad and Mom instructed him on how the garden should be maintained, and he did a great job of keeping it up.
Posted by AmyEmilia at 12:56 PM

The rain and heat of the rainy season meant that tomatoes and peppers and eggplant did very well. Lettuce and endive in the garden, but those would be hold-overs from the dry season garden, when cool weather crops did better. Late lettuce was always so bitter due to the heat.